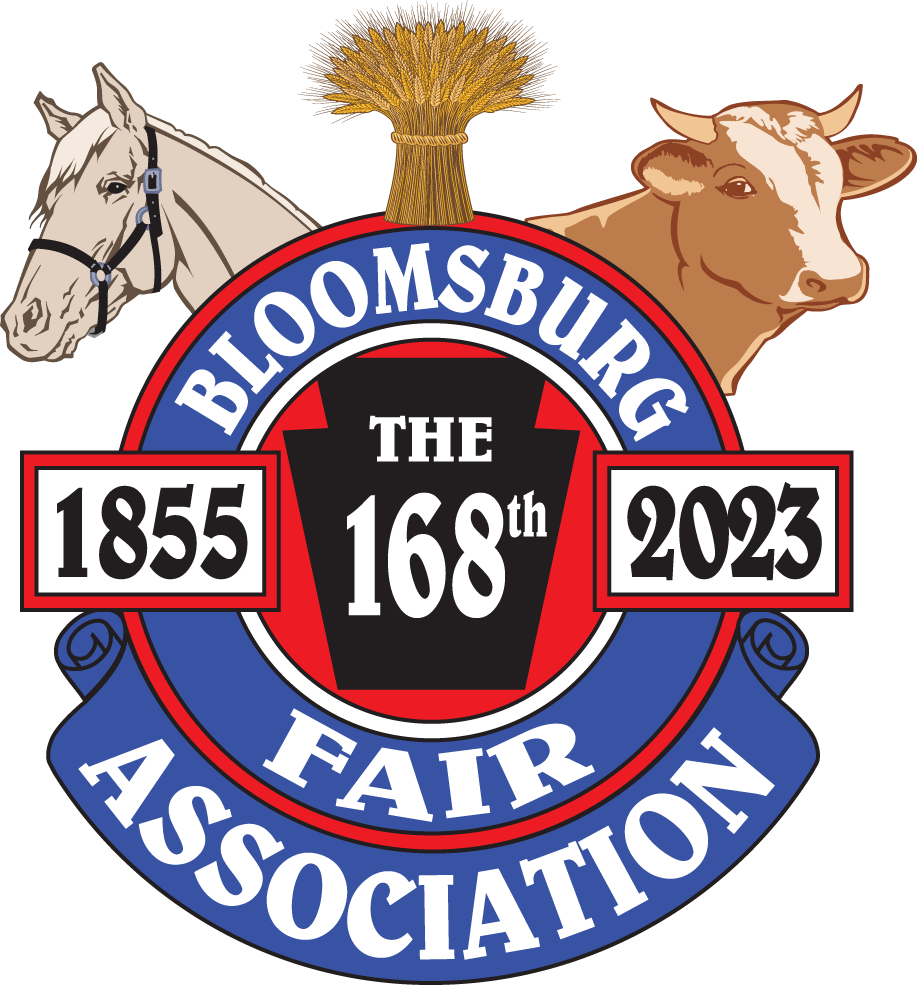 The Following is from the book
“The History of the Bloomsburg Fair” by David R. Millard.
Historians have called it a “street carnival”; the men who first set it up called it an agricultural fair.

That was back in the fall of 1855 when Franklin Pierce was the 14th president of the United States and James Pollock from Northumberland County was the 13th Governor of Pennsylvania. Columbia Countians, about a thousand of them, dug into their respective pockets for the ten cents that admitted them to this new adventure in Bloomsburg. How many others jumped over the rail fence will never be known. The big event was staged in Caleb Barton’s field at the lower end of Second Street, now Main Street.

It all came about because of the enthusiasm of one man, Dr. John Taggart. He had visited a county fair in the northern part of Pennsylvania earlier in the summer. Impressed by the values to a community of an agricultural exhibition, he convinced others of the benefits that could come from such a movement in Columbia County.

Finally, five men held a consultation and decided to undertake an agricultural fair if they could find willing exhibitors of fruits, vegetables and other farm products. Through personal solicitation they found enough interest to encourage them and proceeded with arrangements for an event that was to become The Bloomsburg Fair. The men who ventured all of this were Dr. John Ramsey, B.F. Hartman, Caleb Barton, William Neal and I.W. Hartman.

There were a few exhibits of fruits and grains. Caleb Barton showed his grain drill which he had been using for a few years. B.F. Hartman entered his driving horse which was tested for speed from the foot of Scottown Hill to the double-track bridge. Most of the gate receipts were to pay for the police service. The remaining two dollars were awarded to B.F. Hartman as a premium for entering “the race,” the only one entered.

Very little is known about the first few years of the fair. Presumably it began as a one-day production. By 1857 it was running for two days. In 1858, and continuing until the late 1870’s. it was a three-day fair. About 1878, four days of the fair were being held. in 1892 it began operating for five days.

Then in 1897, for some unknown reason, the Fair week was dropped back to three days. By 1923 it was back to a six-day exposition.

A five-day and six-nights fair began at 4:00 P.M. on Mondays; for the full six-days and six-nights Fair and gates were opened on Monday mornings. The Fair was extended a full seven days and nights in 1988 and a full eight days in 1989.

Gradually through its long history, the Bloomsburg Fair Week moved slowly up the calendar from late October into late September. Fair Week officially begins the third Saturday after Labor Day.

In December of 1858 a Committee reported that C. Barton and Co. had offered ten or eleven acres at the west end of Bloomsburg for two hundred dollars an acre, one hundred dollars to be paid April 1, 1859, and two hundred dollars each year thereafter. As an alternative Mr. Barton offered to lease the same lot for ten dollars per acre per year for one to ten years.

When the Treasurer reported that the total financial status of the Society amounted to three hundred dollars, it was voted to accept the offer of C. Barton and Co. to lease ten acres for ten years.

In 1859 the need for fencing the grounds was discussed and advertisements were placed for sealed bids for fencing. Some of the specifications called for a seven foot fence of good fence boards placed up and down. The fence was to be tight with boards twelve inches wide and secured with no less than six nails. Posts were to be set three feet deep. Payment of one hundred fifty dollars was to be made when the material was delivered on the ground, fifty dollars when the fence was finished, the balance in October or November provided sufficient funds were taken in at the Annual Exhibition. The contract was awarded to Thomas E. Eves who agreed to build the fence for $1.50 for each twelve foot panel. The fence was to be finished July 1, 1859.

Much has changed since 1855 but it is still a country fair. More land…more fence and MORE FUN!!!

“The Bloomsburg Fair Virtual Museum” — A collection of oral histories and historic photographs.

This site, created by Susan R. Dauria, Professor, Department of Anthropology at Bloomsburg University, and sponsored by the Bloomsburg Fair Association, is a compilation of oral histories from persons who had long-time experience at the Fair. There are also historical photographs and another published history about the Fair. Professor Dauria and her students coordinate and conduct statistical and geographical surveys each year at the Fair.